Funny anecdotes and short stories are a great source of examples in public speeches. This website contains short funny stories, clean jokes and humorous legends of kings and queens, politicians, famous literary figures and artists from many books and sources. The styles of writers from different time periods was preserved - they often enhance the stories in an amusing way. Enjoy and have fun!

Jacques Boileau (1635 - 1716) was a French theologian of some renown in his own times. As a matter of fact, even Voltaire left a few observations about this writer, such as "esprit bizarre qui a fait des livres bizarres écrits dans un latin extraordinaire" -- "a bizarre soul who wrote bizarre books in extraordinary Latin."

According to an unconfirmed anecdote, Boileau was often asked why he only wrote his books in Latin. His reply was that this was done to avoid having his books read by the bishops. The theologian apparently feared that some of his arguments might not pass muster of the official church position. He also must have been of a low opinion regarding the level of education to be found among the clergy. This was probably an exaggeration, although there were times in the history of the Catholic Church when literacy among the priests was almost an exception to the rule.

The truth, however, is that Boileau wrote some books in French, not in Latin. But he wrote them under assumed names. One of the more curious books written by the learned abbot was entitled "De l'abus des nudités de gorge" (On the abuse of the nakedness of the bosom), published in 1675. In this book he vehemently opposed contemporary fashions which permitted the ladies to show their necks and much of their breasts. Boileau employed evidence from the Bible, as well as some bits of ancient history (such as a story about Amazon warrior-women). The book enjoyed enough success to be translated into English. Here are some passages from that translation.

There is always danger in attentively looking upon a naked Breast; and there is not only a great danger, but a kind of crime in beholding it with attention in the Churches...

"YOUR Nakedness is pleasing and agreeable to Libertines and Sinners, and therefore there needs no more to conclude that it stirs up to sin, and that it bears the mark and character of Libertinism."

"MEN do very well know how dangerous it is to look upo nanaked bosome; and your vain and light Women are sensible how advantageous it is to them to show it Men say and say again to the women,how much they are smitten at the sight of their Necks and Shapes; the Women know the pernicious effećts which the beauty of their Shapes and Necks produce in the minds of men;and after that, they dare to say they do not believe they do amiss, when they study as much as they can how they may bare all their necks and shoulders, and so show at the same time, and by one and the same address,all the beauty of their shapes. Ought they not rather acknowledge that they are seduced by the world which they love,and ingenuously confess that after it has instructed them of the danger to which they are exposed themselves, and to which they expose others their nakedness, it hides from them that danger, when any occasion presents itself to satisfy their vanity, and to captivate any heart? that to render them the more Criminal, it obliges them to feign that they are ignorant of the evils they are the cause of and to endeavor to hide their faults under the umbrage of a false and pretended ignorance?"

An English officer being promoted to the command of a Scots regiment, became desirious of insuring his life, and appeared at the board of an insurance office for that purpose. A question being put to him, whether he was temperate or free in his manner of living, he replied-- "Gentlemen, you may be perfectly easy on that score, now that I belong to a Scotch regiment: our officers never get drunk at their own expense."

You ought to possess your whole body as a poor mule loaded, as long as it is possible, as long as you are allowed. But if there be a press, and a soldier should lay hold of it, let it go, do not resist, nor murmur; if you do, you will receive blows, and nevertheless you will also lose the mule.

Interestingly, the second part of this quote is a lot more practical, when not fraught with the burden of a philosophical analogy. 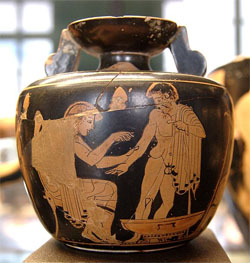 Athenaeus, in Wise Men at Dinner says: If there were no doctors, there would be nothing more stupid than teachers.

Nell Gwynn, a new mistress of King Charles II, was presented with a coach which apparently used to belong to someone else. When Nelly was insulted in her coach at Oxford by the mob calling her "a Catholic whore", after mistaking her for the Duchess of Portsmouth, she looked out of the window and said, with her usual good humor, 'Pray, good people, be civil; I am the Protestant whore.' This laconic speech drew upon her the favor of the populace, and Nell was suffered to proceed without further molestation.