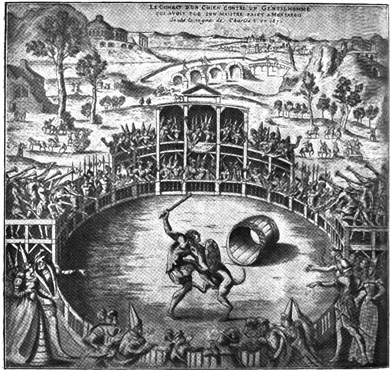 The picture represents the famous trial by combat between the dog "Dragon" and the Chevalier Richard Macaire, the murderer of its master, Aubri de Mondidier, which occurred in the year 1371. The assassination took place in the Forest of Bondy, and the dog not only showed the spot in the forest where the body of his master was buried, but singled out the murderer. The King granted a judicial combat between the dog and the suspected man, in which the dog came off completely victorious.