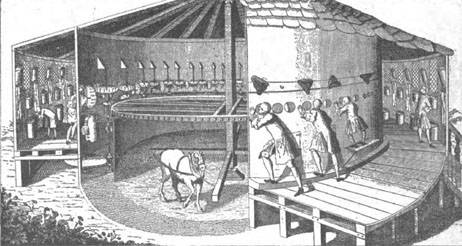 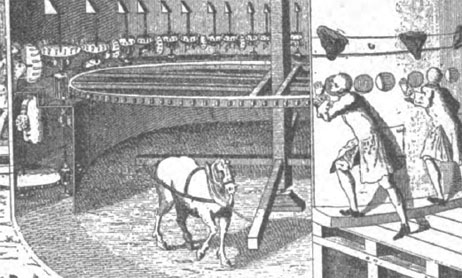 This is a remarkable 18th century invention called a shaving mill. Up to 60 men can get a clean shave in just one minute! It may seem impractical at first, but imagine if you had a garrison of soldiers? more...

One friend of Mae's was overwhelmed when she saw a string of pearls around her neck."Goodness, Mae," she responded, "where did you get those pearls?" "Nevermind," countered Mae, "but you can bet goodness had nothing to do with it."

When asked how she was so familiar with the ways of men, Mae West responded, "Baby, I went to night school". more...

Once while working on a frescoe in the Vatican, Raphael became irritated by the constant criticism coming from a couple of observing cardinals. One complained that, "The face of the apostle Paul is far too red". Raphael answered back, "He blushes to see into whose hands the church has fallen". more...

In 1831, Edgar Allan Poe was allegedly expelled from West Point for neglecting the dress code during public parade. It is said that he mocked the dress instructions by appearing naked, with a rifle over his shoulder, wearing a white belt and gloves. He was released from the academy for "gross neglect of duty". more...

Non Campus Mentis is an excellent collection of "bloopers, malapropisms, revisionist hypotheses, and creative interpretations of history" from actual student papers. This could be a great gift for a history teacher. Here are some excepts:

History, a record of things left behind by past generations, started in 1815. Thus we should try to view historical times as the behind of the present. This gives incite into the anals of the past.
...
Prehistory, a subject mainly studied by anthroapologists, was prior to the year 1500. When animals were not available the people ate nuts and barrys. more...

Some Puns and Conundrums from "Wit and Humor of the Age" by Melville De Lancey Landon, Mark Twain


Why is a lawyer like a restless sleeper?
He lies first on one side and then on the other

What is the difference between a cat and a comma?
A cat has claws at the end of its paws, a comma is a pause at the end of a clause.

What animal would be likely to devour a near relation?
The ant-eater.

Why is a gun like a jury?
It goes off when discharged.

What animal has death no effect upon?
more...

Mr Dallas, who so ably fulfilled the duties of accoucheur to the Childe, was also resolved that it should not come into the world without a sufficient enunciation ; and, accordingly, prepared a review of it for a literary journal to be published immediately on the appearance of the poem. By a very awkward mistake, however, the review appeared before the thing reviewed; and Byron was greatly vexed, from a very likely supposition that he would be considered the author of it. Mr. Dallas, however, explained, and the matter was made up. more...

Sir Arthur Evans (July 8, 1851 -- July 11, 1941), a British archaeologist most famous for unearthing the palace of Knossos on the island of Crete, was entertaining a group of friends on his 90th birthday. One of his guests mentioned that the Germans had destroyed Knossos. Evans was so devastated by this news that he only lived three days past that fateful evening. more...

Franklin Adams (1881-1960), an American journalist and writer of light funny poems, once tested Beatrice Kaufman by asking here what birthday was today. "Yours?" Beatrice guessed, showing visible signs of hope. "No, but you are getting warm", said Adams. "It's Shakespeare's." more...

Mozart was once approached by a young man who was interested in Mozart's advice on how to compose a symphony. Since he was still very young, Mozart recommended that he start by composing ballads. Surprised, the young man responded, "But you wrote symphonies when you were only ten years old." "But I didn't have to ask how," countered Mozart. more...

A Picture by Rubens: an Appraisal story

Richardson, in his anecdotes of painting, says, a gentleman came to me to invite me to his house: "I have," says he, "a picture of Rubens, and it is a rare good one. There is little H. the other day came to see it, and says it is a copy. If any one says so again, I'll break his head. Pray, Mr. Richardson, will you do me the favour to come, and give me your real opinion of it?" more...

Raffael: Generousity of an Artist

RAFFAEL. Francis I. having received a picture of St. Michael from the hand of Raffael d'Urbino, which he much coveted, he remunerated Raffael far beyond what the painter's modesty conceived he ought to receive: the generous artist, however, made him a present of a Holy Family, painted by himself, which the courteous monarch received, saying, "That persons famous in the arts partake of the immortality of princes, and are upon a footing with them."

Albert Einstein's friend was once asked if it was true that only ten people in the entire world truly understood the man. After some pondering the man replied, "Oh, no. There at least twenty, but Einstein is not one of them."

From From Newton to ESP by L. LeShain. more...

George Cohan, an American playwright, actor, songwriter and producer, once auditioned an actor for a role. After the actor left, Cohan said to his staff, "I hate that rat. Remind me never to hire him again unless we need him."
more...

Ultimate solution to the problem of naming a baby

Louis Antoine Jullien, a French composer and conductor was born in a little town of Sisteron. It was understood that the child had to be immediately baptized. Antonio Jullien, the composer's father, decided that it would be suitable to find a godfather among the members of the local Philharmonic Society.

On arriving at the place of rehearsal, Antonio disclosed his intention of having the baby immediately baptized; and demanded which of his friends, the members of the Philharmonic Society, would consent to stand godfather. The voices of all present responded!

Edison himself has played many a practical joke upon his employees, and in the early phonograph days he enjoyed many a laugh on them with the aid of his "talking machine." Sometimes, however, the joke was on him, as was instanced by the "fake cigar" story, which was a popular Edison anecdote twenty odd years ago. Edison was always an inveterate smoker, and used to keep a number of boxes of cigars in his room, and these were a constant object of interest to his associates. First one man, then another, would enter the room, ask Edison some trivial question, and when leaving would manage, unseen, to insert his hand in one of the boxes and annex three or four choice cigars. more...

The legend of sir Isaac Newton and the Apple (Newton's law)

SIR ISAAC NEWTON AND THE APPLE

One day in autumn Sir Isaac was lying on the grass under an apple tree and thinking, thinking, thinking. Suddenly an apple that had grown ripe on its branch fell to the ground by his side "What made that apple fall?" he asked himself. "It fell because its stem would no longer hold it to its branch," was his first thought. But Sir Isaac was not satisfied with this answer. "Why did it fall toward the ground ? Why should it not fall some other way just as well?" he asked. "All heavy things fall to the ground, but why do they ? Because they are heavy. That is not a good reason. more...

Isaac Newton and his dog

While Newton was attending divine service in a winter morning, he had left in his study a favourite littledog called Diamond. Upon returning from chapelhe found that it had overturned a lighted taper onhis desk, which set fire to several papers on whichhe had recorded the results of some optical experiments.These papers are said to have contained thelabours of many years, and it has been stated thatwhen Mr. Newton perceived the magnitude of his loss,he exclaimed, " Oh, Diamond, Diamond, little do youknow the mischief you have done me!"

From The Life of Sir Isaac Newton by David Brewster. more...

Of the score of greatest composers, perhaps none was
more eccentric than that founder of the modern German
operatic school, Richard Wagner. The caller who was
unaware of one of his peculiarities might suffer a mild
shock ; for on entering the room where his visitor was
seated Wagner would throw the door wide open before
him, as if it were fit that his approach should be heralded
like that of a king, and he would stand for a moment on
the threshold, a curious mediaeval figure in a frame.
The mystified visitor, rising from his seat, would behold
a man richly clad in a costume of velvet and satin,
like those of the early Tudor period, and wearing a bonnet
such as are seen in portraitsmore...

When Titian's famous painting of the Last
Supper arrived at the Escurial, the king, Philip
II., proposed to cut the canvas to the size of the
pannel in the refectory, where it was designed
to hang. El Mudo (Philip's "deaf and dumb" painter),
who was present, to prevent the
mutilation of so capital a work, made earnest
signs of intercession with the king, to be permitted
to copy it, and reduce it to the size of the
place assigned for it, offering to do it in the space
of six months. more...

Wolfgang Mozart at the opera

Mozart once created quite a sensation in a theater he was visiting. It was at Marseilles. He had gone to the opera incognito to hear one of his own works performed. All went well till, in a certain passage, through some error in the copyist, the orchestra played "D" where Mozart had written "D sharp." This change of one note made a decided difference in the harmony, and turned the superior harmonic effect intended into a very ordinary sounding affair. No sooner was this done than Mozart sprang to his feet, crying out: " Play D sharp, will you; play more...

Part of the service used in the Pope's chapel at Rome
is sacredly guarded and kept with great care in the
archives of the chapel. Any singer found tampering
with this "Miserere" of Allegri, or giving a note of it to an
outsider, would be visited by excommunication. Only
three copies of this service have ever been sent out.
One was for the Emperor Leopold, another to the King
of Portugal, and the third to the celebrated musician,
Padre Martini.

Mozart Anecdotes: the composition of Requiem, and how Mozart died

The bodily frame of Mozart was tender and exquisitely sensible ; ill health soon overtook him, and brought with it a melancholy approaching to despondency. A very short time before his death, which took place when he was only thirty-six, he composed that celebrated requiem, which, by an extraordinary presentiment of his approaching dissolution, he considered as written for his own funeral.

One day, when he was plunged in a profound reverie, he heard a carriage stop at his door. A stranger was announced, who requested to speak with him. A person was introduced, handsomely dressed, of dignified and impressive manners. " I have been commissioned, sir, by a man ofmore...

The most celebrated of Mozart's Italian operas is
Don Juan, which has recently been performed with so
much applause in London. The overture was composed
under very remarkable circumstances. Mozart was much
addicted to trifling amusement, and was accustomed to
indulge himself in that too common attendant upon
superior talent, procrastination. The general rehearsal
of this opera had taken place, and the evening before
the first performance had arrived, but not a note of
the overture was written. At about eleven at night,
Mozart came home, and desired his wife to make him
some punch, and to stay with him more...